In August 1920, Jasper and Ina moved with their three boys to New Hampshire. Young Georgia remained behind in Fredericton with her Aunt Ida, her deceased father’s sister.

Lured by the prospect of greater prosperity and nearing retirement age, my great grandfather Henry decided to sell the farm in Fredericton and along with my great grandmother Commela and their youngest son Willis accompany Ina and Jasper to New Hampshire.

But the 1920’s in New Hampshire turned out not to be good years to be in farming.

During World War I, the government had encouraged farmers to up their food production but after the war was over and life returned to normal, the demand for farmer’s goods decreased. With it went the profits they had enjoyed.


Perhaps my grandfather and great grandfather thought it would be different south of the border. It was, at first. However, it didn’t take long before farmers on both sides of the border were feeling the financial pinch.

Life on a New Hampshire farm during the 1920’s was hard.. Not only did the men work from dawn to dusk but the women did not enjoy the conveniences of modern life as we know today. They all went to bed with the chickens, thoroughly exhausted and got up with the rooster’s crow to start all over again.


During the 1920’s, three new additions were added to Ina and Jasper’s quickly growing family.

Shortly after arriving in New Hampshire, Ina discovered that she was pregnant with her fifth child. Florence Commela was born the following May.

Aunt Flo had often wondered where her first name had originated. A search through existing family records indicated nothing. Had she been named after a friend of her mother’s? That, of course, we would never know.

It was only when I decided to do a search for popular baby names in the 1920’s that I discovered that Florence was a popular girl’s name at the time. Did Ina love that name so much that she decided to give it to her new baby girl.? I like to think so. So did my aunt when we chatted about it a few months later.

Her second name, of course, came from her grandmother Burnett. However, most of her life, aunt Flo had spelt it Camella (with an “a”) and not Commella (with an “o”). Her birth certificate, which she acquired much later on in her life had Commela spelt with an “a” and only one “m”. The discrepancy in spelling was only discovered during my research and was likely a transcription error from her original birth record. Handwritten “o’s” were often mistaken for “a’s” and dropping an “m” made the pronunciation look “right”! Another mystery solved LOL.

Florence was not yet a year old when Ina discovered she was pregnant again! Another son, James Henry was born in November of 1922.

In the latter part of the summer of 1923, the announcement of yet another child on the way, her sixth pregnancy since marrying Jasper in 1915, may have caused some very serious discussions within the family. Times were hard. Money was scarce. Their farmhouse with five adults and five children was already bursting at its seams. The prospect of yet another mouth to feed, clothe and care for likely came as a shock.

Ina, never robust, continued to struggle intermittently with her health. The financial burden of a large family, hard, heavy work on the farm, the care of five children all under the age of eight and aging in-laws (65 in those days was much different than it is today!) was beginning to take its toll. The strain began to show on her face. Photographs of her during this time show a woman putting on a brave face but appearing frail and looking much, much older than thirty three years of age.

In May of 1924, her last child, another daughter, Ina Bertha was born.

That summer, Georgia came to visit with her mother and step-siblings during her school holidays. Georgia was introduced to her new baby sister Ina. She was very taken with Ina and it was a relationship that remained strong throughout their lives.


Below is a photo of "little" Ina at age 9 sittin' on the woodpile behind Goldie and Belle Nugent's (Ina's only surviving brother and sister-in-law) home in Fredericton. 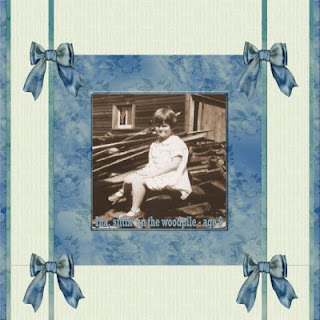 The Tragic Loss of a Mother

By the fall of 1925, Ina’s health had deteriorated even more. In late November she was diagnosed with tuberculosis. Already in poor health, the diagnosis was a death sentence.

In those days, the rearing of children was left up to the female members of the family. Although I knew some of the details that followed my grandmother’s death, it had never occurred to me until I was creating this family book that the burden for raising these children fell squarely upon my great-grandmother’s shoulders when Ina died.

Conversations with my aunt Flo confirmed that indeed this was the case.

I felt a strong bond of empathy growing with my great grandmother. Women at that time in our history did not express their feelings openly. I began to imagine what it must have been like for her when Ina died.

All indications are that she was fond of Ina and to lose her daughter in law must have been very difficult all by itself. But to be faced with the prospect of raising six children, all under the age of 10 at age 62 (she was four years younger than my great grandfather) had to be very overwhelming.

“What must have been going through her mind?” I wondered. “How must she have felt?”

I decided to write a letter for my great grandmother to a female relative on her side of the family to express some of those feelings that had, in all probability, never been expressed. It was my gift of release and thanks to my great grandmother for all that she did to help these young, now motherless children, in the best way she knew how. 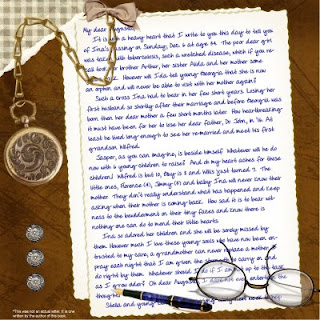 It is with a heavy heart that I write to you this day to tell you of Ina’s passing on Saturday, December 6 at age 34. The poor dear girl was taken with tuberculosis, such a wretched disease, which if you recall took her brother Arthur, her sister Alida, her father and her mother. However will Ida tell young Georgia that she is now an orphan and will never be able to visit with her mother again?

Such a cross Ina had to bear in her few short years. Losing her first husband so shortly after their marriage and before Georgia was born, then her dear mother a few short months later. How heartbreaking it must have been for her to lose her dear father, Dr. John in ’16. At least he lived long enough to see her re-married and meet his first grandson Wilfred.

Jasper, as you can imagine, is beside himself. Whatever will he do now with 6 young children to raise? And oh my heart aches for those children. Wilfred is but 10, Guy is 8 and Willis just turned 7. The little ones, Florence (4), Jimmy (3) and baby Ina will never know their mother. They don’t really understand what has happened and keep asking when their mother is coming back. How sad it is to bear witness to the bewilderment on their tiny faces and know there is nothing one can do to mend their little hearts.

Ina so adored her children and she will be sorely missed by them. However much I love these young souls who have now been entrusted to my care, a grandmother can never replace a mother. I pray each night that I am given the strength to carry on and do right by them. Whatever should I do if I am not up to the task as I grow older? Oh dear Augusta, I dare not even entertain the thought.

Stella [my great-grandmother’s only daughter with whom she was very close] and young Lenore {Stella’s daughter and my great grandmother’s granddaughter] are arriving next week to help….”

It took me a long time to write that letter. I shed many a tear while composing it Perhaps those tears were the ones my great grandmother felt inside but felt couldn’t or wouldn’t show at the time.

My aunt Flo cried softly when she finally got to read it a few months later. As she dried her tears, she said: “My grandma was a wonderful woman. She took care of us as best she could for as long as she could. Where ever did you find that letter?”

I told her I had written it myself.

She stared at me in disbelief.

“Sharon, I honestly thought it was a letter grandma wrote. It sounds just like grandma used to talk. I could hear her voice as I read it. I thought she had written it to Augusta. I have needed to hear everything in that letter since the day my mother died.”

My dear auntie slept soundly that night for the first time in a very, very long time. I know because I was there with her.