“She was only three when she went to live with her aunt Ida. She never lived with us but she came to visit us often when we lived in New Hampshire.”

I was stunned. All my life I had believed that my aunt Georgia had lived with her mother after her marriage to my grandfather and had only gone to live with “an aunt” after her mother died in 1929.

I’d heard the name when I was quite young but of course hadn’t paid it much attention. I wanted to know. Was this the same Ida whose name was on the back of the fading family photograph at the Burnett farmhouse when my Dad was a baby? 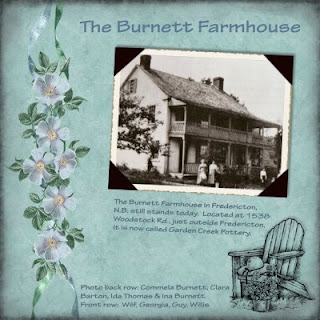 “She was my mother’s first husband’s sister.” said aunt Flo. “She was a spinster and didn’t have any children of her own so when my mother re-married she offered to take Georgia. I think that’s why Georgia hated my Dad so much all of her life. He took our mother away from her and she never forgave him for it. She was so bitter towards him. She told me once she thought he was responsible for her death. That made me feel so horrible.”

“Whoa”, I thought to myself. “I am beginning to understand why she tore up all the family pictures, broke all of her records and ripped up the memorabilia she had gathered in the course of her career before she died. "

What Georgia may not have realized (although it is unlikely that it would have made a difference… emotions are much stronger than logic) is that during the Victorian era and the early 1900’s, it was not at all unusual for children of a first marriage to be sent to live with paternal relatives after the death of their birth father.

Women typically did not work outside the home. Unless they were independently “wealthy” or had inheritances of their own to sustain them, women and especially widows had to re-marry for their own security.

Although some men were comfortable accepting the children of a first marriage, many were not. Children were sent to live with relatives as a way to increase a woman’s chances of finding a new husband. Whether this was the case or not, I shall never know. That information died with Ina Burnett and Ida Thomas.

Over the next hour, aunt Flo gave me a brief sketch of my aunt Georgia’s life after the death of their mother.

Georgia and her aunt Ida moved from New Brunswick to Cape Elizabeth, Maine. Ida Thomas was not wealthy but had sufficient means to give Georgia a home and first class education, not only academically but musically as well..

After high school, Georgia left Maine for New York city to study voice at the Julliard School of Music. She sang with the Metropolitan Opera, touring with them for a number of years. When the United States joined the war, she traveled all over the world with the USO entertaining the troops. She was with the USO for years.

Her first marriage to a man eight years her junior turned out to be a terrible mistake and ended quickly. She resolved never to marry again.

Over the years though, she kept in touch with her old friend James whom she had known since their school days in Cape Elizabeth. James, who was a language teacher and singer, left Cape Elizabeth in 1938 and moved to California.

In 1965, Georgia moved from Cape Elizabeth to Miami, Florida. She and James saw each other frequently over the years and eventually James convinced her to move to California and marry him. They had sixteen more years together before he died in 1989. In 1990, Georgia moved to Pleasant Hill, California to be closer to my aunt Flo in Walnut Creek.

“She told me she was moving to Pleasant Hill to be closer to me. But I hardly ever saw her after she moved even though she was just a hop, skip and a jump away.” said aunt Flo.

“Georgia was a hard woman to understand.” she continued. “She was always a part of our family, at least where my brothers and sisters were concerned. We included her as much as we could. We kept in touch with her throughout her life. I loved her dearly but oh my she could be very difficult. She was so hard to get close to. She’d “run away and hide” a lot. It makes me sad just thinking of her.” She began to cry. 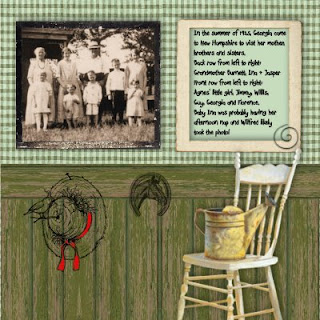 Photo taken in New Hampshire circa summer 1927
during one of Georgia's visits to her mother.

Aunt Flo and I never spoke of Georgia again after that day. It was too upsetting for her.

I met my aunt Georgia but one time. She came to visit my parents and I remember being fascinated with her stories and awed by her beautiful singing voice.

I wrestled for days with whether or not I should include a separate page for her in the Burnett family book. It was one of the most difficult decisions I had to make in the entire process of gathering the information and photographs together.

In the end, I decided to include her in the family tree information and include photos of her but not make a separate page for her as I did for each of her step-siblings.

Today, my heart still aches when I think of that little girl inside of her who likely felt cast aside, lost and abandoned her whole life through.

I came to realize that my aunt Georgia likely forced herself to put on a brave face for 87 long, lonely years. Did that little girl inside of her feel heartbroken and rejected most of her life? Did she still long for the comfort of her mother’s arms and pine for the love she felt had been taken from her when she died at age 90 in 2002? My guess is yes.

This blog post is for you and you alone aunt Georgie. May you rest in peace.