Well  it's hard to believe that it has been so long since I last posted!!  It has now been well over six months since my hip operation and I am glad to report that I am coming along just fine. I still can't walk very far or stand for any length of time but I am back to my early morning swims and trips to the gym, as well as dutifully (chuckle) going shopping  spending hubby's money and for the last couple of months teaching myself how to sculpt character faces in polymer clay.

I remember hearing somewhere along the way that it takes about 40 tries until you get it.  Yep... whoever said that was right!!  I have created some absolutely hideous looking faces and heads over the last few months.  I decided right at the beginning of this adventure that I would keep making them and smushing them up until I got one that looked like it wasn't from outer space.  Took about 25 tries and in the end the clay was so absolutely filthy from so much handling that I tossed it out too! 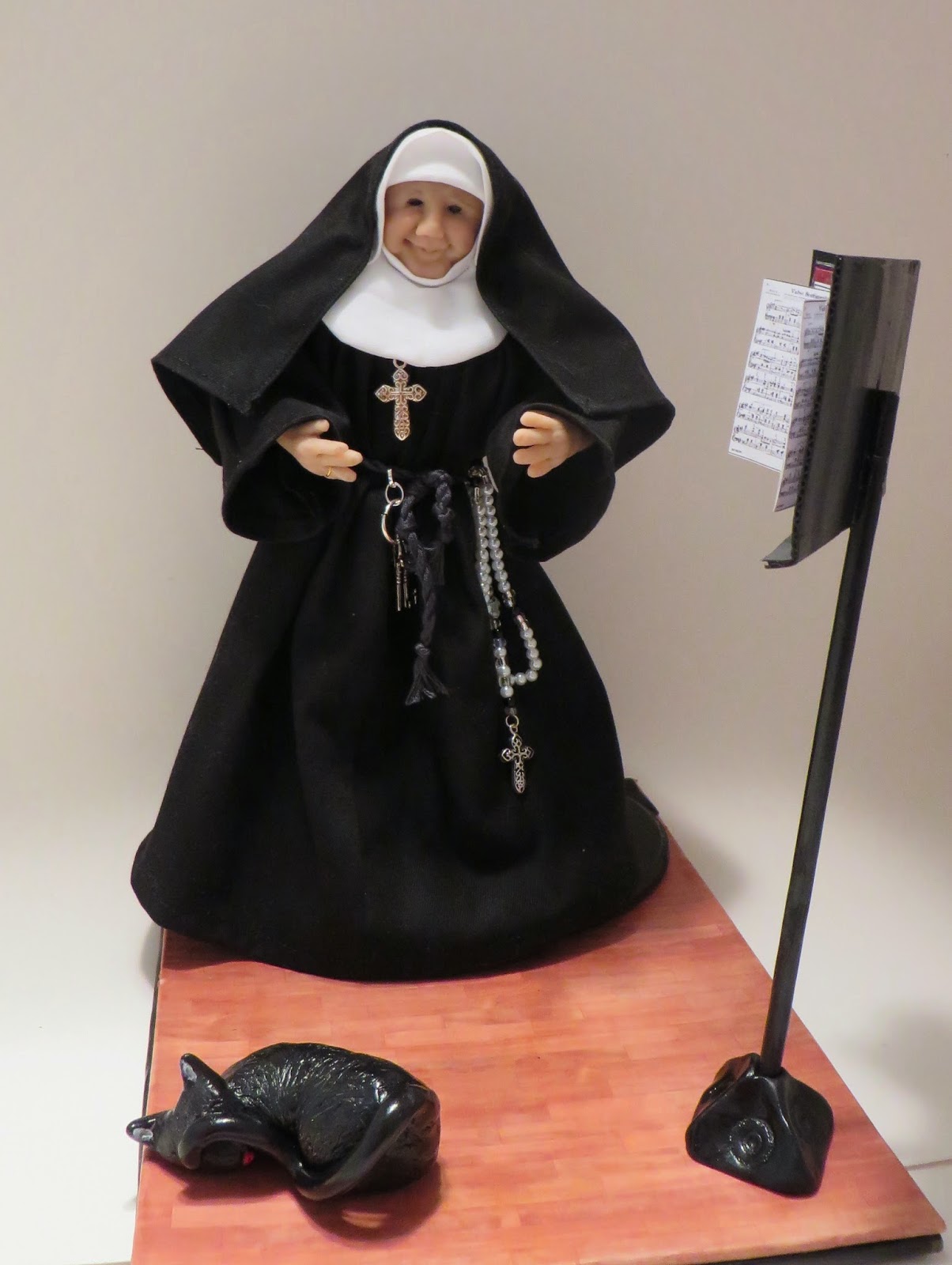 Her music stand was easy to make to scale.  A couple of pieces of cardboard, some paint, a dowel and clay and she was in "business".  Her music book is made from some black leather I salvaged from the cover of an old encyclopaedia and some mini music sheets sewn together.

And Samson, the cat... well he's just being a lazy ole cat, lying there being lulled to sleep by the sweet voices in the children's choir the sister is leading in song. 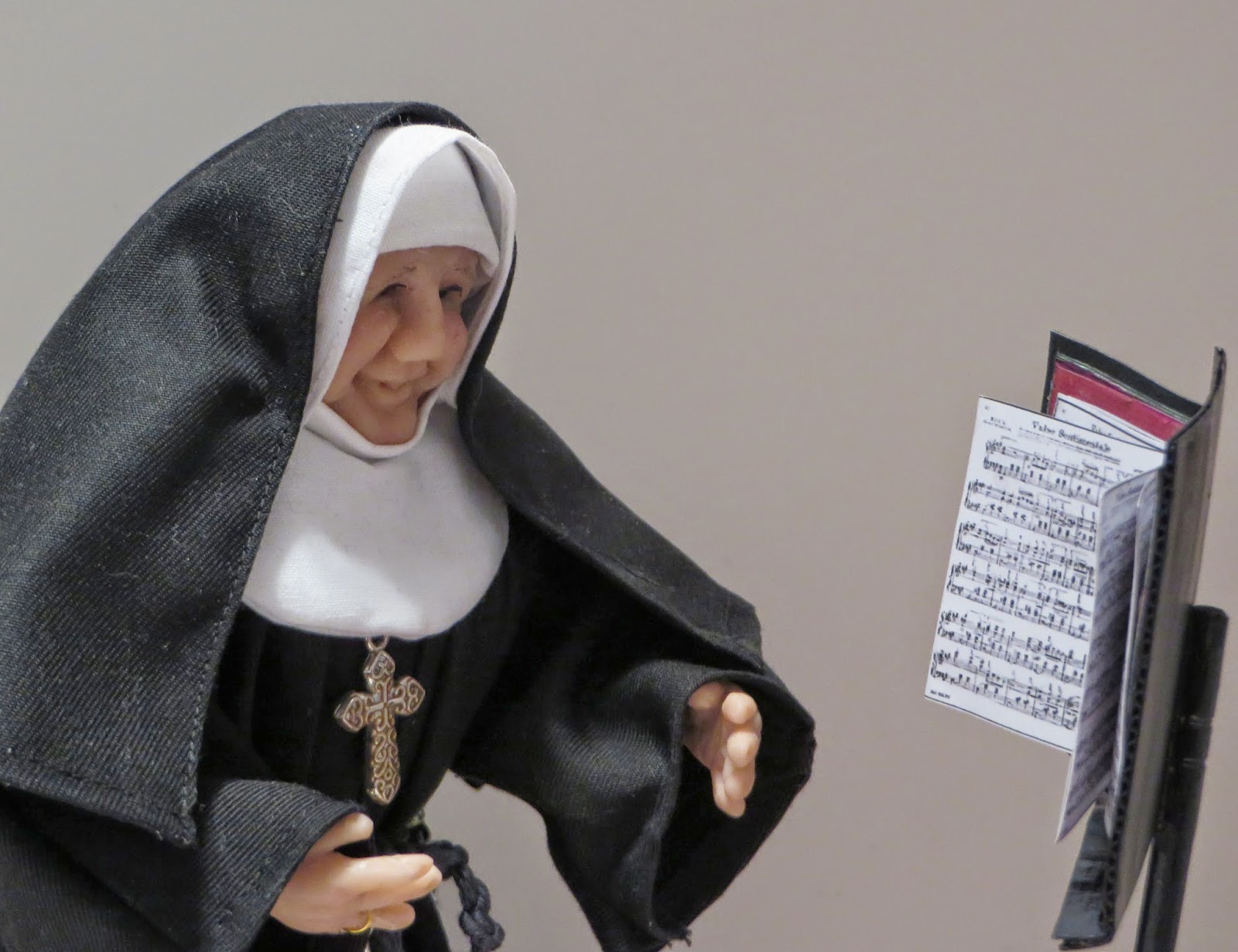 At just 10" high, I think her personality shines through beautifully.  She has the sweetest face.  I discovered that I like to do older faces  They just have more personality. 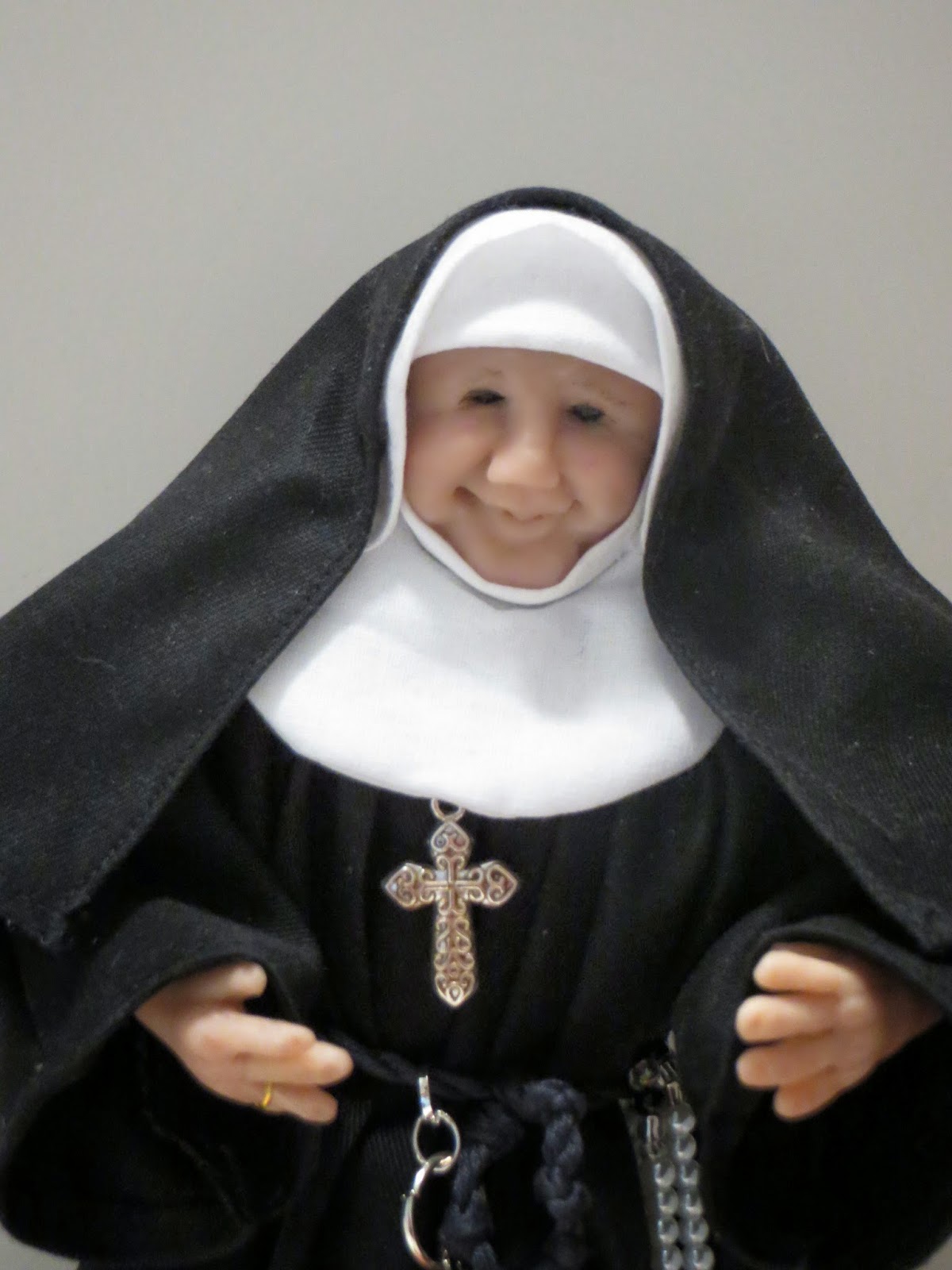 It has been quite an adventure in costume making!  I scoured the Internet looking for doll patterns for nuns habits and came up empty.  Finally I decided that the only way she would be completed is if I figured out how to make her habit myself.  Well, if there is one thing I am good at, it's research!!  And, being a non-Catholic, what interesting information I stumbled upon along the way.

Did you know that a nun's belt has five knots in it?  There is a knot for the five wounds of Jesus at his Crucifixion (both hands and feet and his side).

Her rosary (or prayer beads) with the cross tucks into her belt by her side and has 6 black beads (our Father beads) and 53 little pearl beads (Hail Mary beads)for a total of 59 beads.  If you are interested in finding out more about the rosary and how it is used in the Catholic faith, there is an excellent article here.

So I hope you have enjoyed being introduced to Sister Mary Catherine and now... on to my next project... an old fart and his "new" older gal friend.  This one is gonna take awhile!!

Wishing you an arty week,