AllSorts of claying around...


I was wandering through Costco around mid week looking for some AllSorts candy for my father in law for Christmas.  He loves licorice, especially Allsorts and at nearly 91, I think he should get to eat all he wants.  I found a very big box of it (kinda Costco style, LOL) and when I got it home it only lasted about 10 minutes before the eldest son of my father in law (my dear hubby) decided that Christmas had come early to the House household.  He just had to sample some of Dad's licorice!!  Out came the candy dish and the nibbling began...

I took one look at that candy dish sitting on the table and a thought popped into my head.  "I bet I could make some of those in clay.  John (my father in law) would never be without Allsorts again!" I chuckled to myself as I dashed off to my art room to see what I could do.


So now I have a confession to make.  There weren't any REAL Allsorts left to take a photo of so the photo below is really the FAKE candy made from polymer clay. 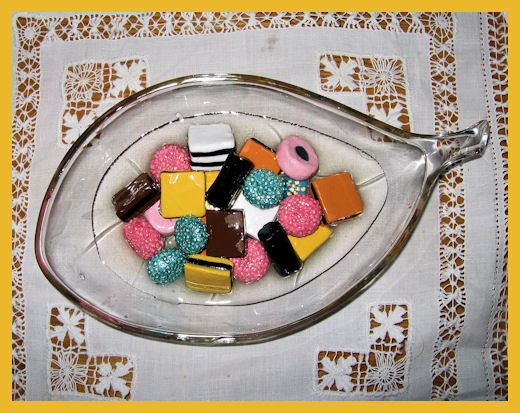 Once all the pieces were "cooked", I piled them into the clear candy dish that's been hanging out in my china cabinet for years patiently waiting to be donated or sold at a garage sale LOL and covered the "candy" with resin.  Once everything was dry and touchable, it was time for

When eldest son was presented with two candy dishes, one with the real stuff and one with the fake stuff, he chose the fake candy.  He thought it looked more real than the real candy!! Mission Accomplished!!

I think the next time I will do two resin pourings instead of one to get more built up texture on the top but other than that, I am pretty happy with the results.

Oh what a good chuckle we have had with this little project.  It will be interesting to see the look on my father in law's face when he opens this package at Christmas.  And yes, I will buy another big box of the real stuff too... only this time I will smuggle it into the house and hide it!

Have a great week...