Well I think I have FINALLY beat the cold that has been plauging me the last couple of weeks into total submission. LOL.

When my head cleared up, I realized that I had promised to post photos of the two polymer clay submissions that made it into the Sidney Fine Arts show earlier this month.  Better late, than never...  let's start with "Tweet T" and the fun story about her trip to the art show.  Here's a photo of this whimsical steampunk style teapot... 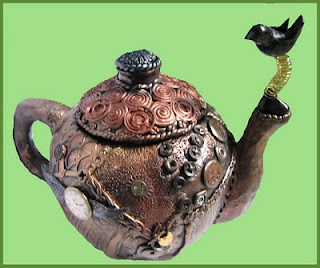 I happen to love tea pots!  Don't ask my why... I just do.  I really enjoyed creating this clay teapot.  What fun it was to see it "come to life" with all of the different textures, the faux screws, charms, vintage clay button replicas, and the clock with clay wings... just some of the "decorations" that found their way on to this creation.  But somehow it felt incomplete and I couldn't quite put my finger on it.  So I did what I usually do when I run up against the "incomplete feeling barrier"... I just set it aside for a couple of weeks.

One afternoon when I was making a pot of tea, the whistle on the kettle sounded and I knew instantly what was needed to finish the teapot.  The image of a blackbird sitting on the end of a branch "tweeting" away was so clear in my mind I actually shuttered on the spot.  LOL.  The thought that followed it actually made me chuckle out loud ...  "Tweet T"... a fun pun!  Needless to say, I finished the teapot that afternoon.

When No. 1 son came to visit in July, he couldn't keep his eyes off "Tweet T".  He fell in love with that teapot... there was something about it that just spoke to him.  A least a dozen times he made comments about it until finally:  "Boy I sure love that piece." popped out of his mouth.  "Be a nice Christmas present." said he.  Hint, hint, nudge, nudge.  When I told him it was destined for the Sidney Show in October, he was visibly disappointed.

A day or so before he left to go home, we were chatting over a cup of tea about some of my art .  He wants his mama to be famous LOL and wondered if he could do anything to promote my work in the town where he lives.  Once again, he mentioned how much he liked that teapot and said: "Well, you could make something like that for me for Christmas if you'd like."  Well, I was okay with that and said, "Sure, just as long as I have time to get it done."

Fast foward.  Out it went to Sidney for jurying and it got accepted for the show.  When I told No. 1 son about both pieces being accepted, he was happy for me but said: "Well, don't take this the wrong way Mom but I hope Tweet T comes home with you."

Well I should have known right then and there that there wasn't a chance of it selling and going to someone else..  How dense was I anyway?  GRIN.  He put his name on that teapot and with that kind of energy around it, it was destined not to sell!  And sure enough that is exactly what happened.

When I went to pick it up after the show, it all became crystal clear.  As I was checking in, I said to the volunteer, "Well that's going to make our eldest son happy.  He really covets that teapot."  DUH!  As it came out of my mouth, I looked at hubby and we both started to laugh.  It was just TOO funny!

No. 1 son doesn't know that it didn't sell.  He asked the wrong question when we chatted about the show WHEW I didn't have to fib!  Imagine his surprise when he opens his Christmas present this year... the look on his face will be priceless.  What a lovely thing to be able to do for such a thoughtful, kind young man.

Tune in tomorrow for the tale of "How the Cow Comes Home" and see a photo.  I have a very special story to tell about the lovely gentleman who bought her at the show that deserves a post all of its own...