It's hard to believe that I have hit the 100th Post milestone!  When I started blogging, I wondered how long it would take me to get to 100.  I wasn't sure if I was going to like blogging and figured if I did hang in there, it would probably be years and years... shows you how much I know... LOL.

First, I am certainly going to give myself a pat on the back for getting to this milestone.  PAT! PAT! PAT!  I re-discovered just how much I like to write and share my "stuff" with others and can't imagine NOT blogging.

Second, I'd like to say a big THANK YOU to those of you who have hung in there with me and to those who have signed up as followers.  Thanks  also to those who left so many wonderful comments and sent many lovely emails during that time.  I love hearing from you and boy you sure haven't disappointed me!

Third, it's been such great fun getting to know some of you better and becoming "pen pals".  That's really been a bonus I never expected... it reminds me of the many "pen pals" I had from literally all over the world when I was a kid.

Did you ever have a pen pal?  If you did, what do you remember about that experience?  How long did you keep in touch with each other?

I certainly had a number of them.  Some lasted for just a couple of letters back and forth.  Others a little longer.  But I especially remember one of my pen pals that I corresponded with for nearly ten years... from the time I was about eight years old (my "Nancy Drew", mystery detective and writer era) until I was 18 ( head over heels in love with a young, dashing, "worldly" (or so I thought at the time) pilot... oh so terribly exciting and romantic).

Roberta and I  never did meet during all the time we wrote back and forth.  She lived on one side of Canada and I lived on the other.  Flying across the country for a visit in those days just wasn't in the books.   Driving over 5,000 miles on a vacation didn't happen in most families (probably still doesn't).   An opportunity to meet just never presented itself.  However, over the years we became the best of buddies and shared everything! From our childhood secrets, complaints about our "horrible" siblings, our latest craft "creations" and "art" endeavours, our first crushes on boys in the next grade, our "wretched" parents who just "didn't understand" us at 14.  Oh and Elvis...and the Beatles... now my age is showing (tee hee)... just made our hearts go pitter patter!

We eventually lost touch with each other as our young lives started moving in different directions. Roberta was a year older than me, got married and had a baby. My romance came to an end abruptly and I was thoroughly heartbroken. These days, I have often wished I had saved all of our letters. Wouldn't it be interesting to read all those "missives" that passed between us during that time?  I am certain we would have more than a couple good chuckles along the way...

I have some news that I am just dying to share with you!  One of my entries into the Sooke Fine Arts Festival made it into the show that will take place at the end of this month.  I was absolutely thrilled to bits... it's so hard to get into that juried show in the first place and it seems to get harder every year as they receive more and more entries vying for a spot in this premier Vancouver Island show.

The way it works is this:  You bring your art work out to the location in Sooke, B.C. (not far from Victoria) where the show will be held.  In the following week all of the entries are judged by three prominent B.C. artists.  The following weekend, you make the trek back out to Sooke to get your results (to either pay the hanging fee for your art if you have been accepted and/or pick up any art work that hasn't been accepted... you can submit up to three pieces).

I wasn't sure whether or not the pieces I submitted would make it or not.  Why?  Because they were in polymer clay AND in the "steampunk" genre.  The fact is there are many artists (and judges) who don't consider anything that is not a watercolour or a painting to be art let alone mixed media or polymer clay.  And "steampunk"?  Well it's hot among mixed media artists these days but what about art show judges?

As soon as I was handed the envelope (heck, it feels like it's the Academy Awards when they give it to you), I knew.  It was thick.  That's always the clue because they enclose tickets to the Artist's reception and other information about the gift store during the show. Now I was really excited and curious... which one got in (I had submitted two polymer clay steampunk pieces)?

Holding my breath, I opened the envelope.  With hubby leaning over my shoulder for a peek, I opened the sheet of paper with the "news" on it!  YES!  A Big Hug from hubby and high 5's as we yelped with pleasure... My polymer clay steampunk piece, "If Pigs Could Fly" had made the cut.  Hubby felt pretty smug... he'd been saying for weeks is was a shoe in and uh huh, like most guys, he likes to be right!

Now, unfortunately, I can't post a photo of it today but I can promise you,  you're gonna have a chuckle when you do get to see it once the show begins.  I'll post a photo the day the show begins.  For today, let's just say, I had an absolute blast making it and just as much fun thinking about it as it came together.  I'd like to think that it brought a smile to the judges faces.  I'd also like to think that someone who attends the show and discovers it, is going to fall madly in love with it and just have to have it.

So now I have to get busy getting *stuff* ready to put in the gift store... some art cards and some Inukshuk earrings and pendants.  It seems that every time I wear my earrings and pendant, someone stops me and wants to know where I got them.  When I tell them, they ask:  "Do you take orders?"  Well I am not going to say no to that now am I?  Here's a photo of the earrings and one of the pendant... aren't they cute??? 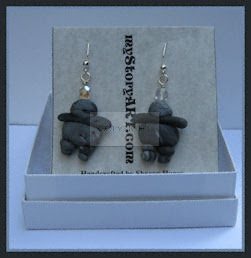 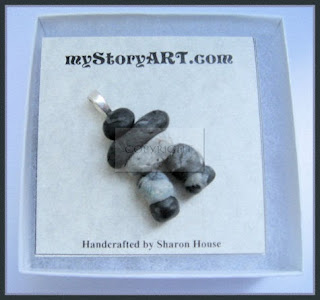 I think what I like about them most is that none of the "little guys" are exactly the same... they all turn out differently and I never know what they will look like until they are done.  I love that kind of mystery!

One of our kids is visiting for a couple weeks so we are off sightseeing and to the beach this weekend... it's going to be HOT, HOT, HOT...a rather unusual occurrence for this temperate part of the world but I'll take it... it's been so cool in this part of the country that I never thought summer would arrive!  Did I mention that I am solar powered???

Thanks for stopping by today. Have a great weekend...