I can hardly believe that is has been nearly a month since I last posted! My how time flies when one is involved in STUFF!

So what have I been up to you ask. Well, here's a brief rundown...

* The Storytellers of Canada Conference
* Lounging on my favourite beach, catching up on some books I have been meaning to read for absolute ages.
* Raiding the library of Polymer Clay books and getting excited about the possibilities for some nifty jewelry and art projects.
* Making an unholy mess in my art room
* Getting sand between my toes at the beach with hubby and friends
* Doing some metal effects art
* Finishing off some project submissions for the Sidney Fine Arts Show
* Making a ton of art cards
* Hanging out with the acupunturist in the hopes of relieving some of the sciatic pain I've been experiencing
* Taking an afternoon snooze at the beach... lulled to sleep by the sound of waves...
* Doing some preliminary set up for recording next month's blog story...

And that's just for starters! I won't bore you with all the nitty gritty details but here's an overview (and photos) of some of them...

I'm tickled to report that the Storytellers of Canada Conference here in Victoria at the beginning of July was a roaring success! We were thrilled with the press coverage we got... I had a number of interviews with the press and the articles the reporters wrote were spot on... heck I even got my photo in the Times Colonist... our main daily rag!

The turnout for the conference was the biggest ever in their 17 year history. The two storytelling performances were magical... we sold out the Island Tellers performance and the attendance at the National Tellers performance was fantastic. It was great re-connecting with storytelling friends from across Canada and the U.S. In the halls of the university, the back chatter from many of the conference attendees was that this was the best conference they had ever been to! But... sigh... it went by in a blur and *boo hoo* even though I purchased a ton of tickets... I didn't win this year's Story Save art quilt! Sorry I don't have a photo to show you... but I can tell you that it was gorgeous and I absolutely lusted after it!

I have decided to play with clay for the next couple of months and oh my is there a lot to learn! I dabbled in it a few years ago... making some minatures for a project I was working on... but never really got into it. Of course, I would pick one of the hottest weeks of the summer to start this adventure. Clay does not like it when it's warm I quickly found out! Good thing I have a little fridge in my art room to cool it down. After my first few tentative forays into this type of art, I have come to appreciate just how much is really involved in creating with polymer clay.

My art room looks like a bomb hit it right now... I raided the local library for "clay" books and they are scattered all over the place. Gosh, I have come across some wonderful projects that would keep me busy for the next five years! It's hard to know where to start first... I'd like to do them all and right now, thank you very much!

As a first experiment, I tried making a cane. Well I was doing okay until I screwed it up. Reducing a cane means rolling it in your hands Sharon to make it smaller not rolling it out like a pancake to make it larger! I don't know what I was thinking but I recognized my mistake right away but too late! I could have kicked myself in the butt right then and there. Here I was with this pile of (screwed up) clay and I didn't know what the heck to do with it. The project I had planned to do was thrown out the window.... I was not amused.

Frustrated, I finally decided to roll some of it through the pasta machine. Hey I had nothing to lose at this point. I was rather surprised when I got this very modern, abstract pattern that I could perhaps do something with. I sighed. Perhaps all was not lost after all. I messed around with it, looked at it from all angles and decided what I'd do with it. Here's a photo of what I came up with... 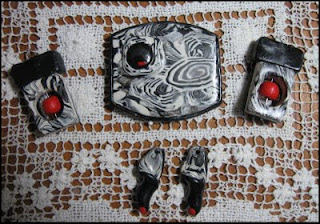 On the left and right of the pin are two pieces that started out being earrings but ended up being pendants because they are too heavy! I cut on hole in the middle of the bottom piece and put a bead in each of them that actually spins. That was a fun bit of whimsy!!!

Those squiggly things at the bottom are earrings. I just twisted the clay at the bottom... they look quite nifty when you see them in person... the photo doesn't do them justice.

Last night it came to me that this clay pattern would make some cool looking buttons... so of course I had to make some! I tried taking some photos of my creations but not having my photo light box set up right now, the photos ended up looking pretty crappy. I'll post a photo once I set up my box again but I can tell you that they look really interesting and these one of a kind buttons would look splendid sewn on a black and white quilt, a black dress or jacket!

Earlier this year, I got very turned on working with metal. I finally got all the tools from Ten Seconds Studio and some metal to play with. Both of the pieces below are quite large but I sure had fun doing them. The roosters piece is large enough to put in the bottom of a tray under glass and I will probably end up doing that. The "flower" piece would fit nicely on top of a box. They certainly soak up lots of time doing them... easy to get hooked on doing this type of art... it's fun watching the pattern evolve. I am pretty pleased with the way they turned out... it's just difficult taking photos of them because they are so shiny! 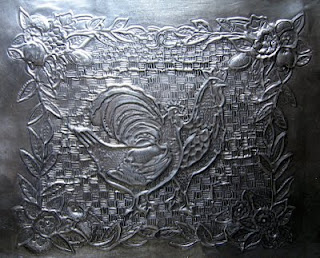 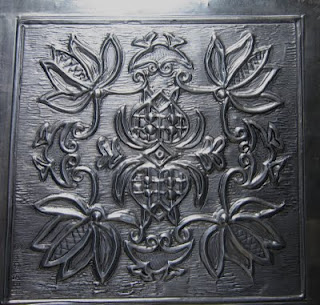 Ah my favourite spot to hang out... and the weather has been just glorious.

Right now we are in the middle of a "heat wave" ... something we don't get too often in Victoria... and with no air conditioning in our house (we don't need it most of the year... it cools off beautifully at night here), the sensible thing to do is just pack your sunscreen, a hat, a quilt, some good books, nibbles and lots of water and head to the beach! The air conditioning down there is cheap... that nice breeze that blows in from the ocean feels soooo GOOD.

Today it is supposed to go up to the high 80's (that's hot in Victoria) and we will actually have some humidity (but not the stifling kind one experiences down east or in the south) that will likely raise the temperature about 5 degrees on top of that. I've already got my bag packed... just have to get my water and nibbles together and I'm outa here....

Have a great week... and stay cool!