A Valentine’s Day Invitation
Before I get into this week’s “episode”, allow me to invite you to the Valentine Blog Party sponsored by Flatwood Design this coming Saturday, February 14.

I love surprises (the good kind that is!) so I am keeping the fun projects and downloads I have for you in celebration of Happy Hearts Day a secret. Not easy for me to do! I want to share what they are with you so badly I have to bite my tongue in order to not give them away! LOL

So put a nice big heart on your calendar as a reminder to drop by and join the party on February 14!

My desk was a mess! Everywhere I looked, there were post it notes with scribbles of names and dates I had discovered in my research over the past couple of weeks. I was feeling bogged down, confused and getting more frustrated by the minute. I began to understand why my sister had felt so overwhelmed sorting through the myriad of “paper slips” with family information on them that Dad had left behind.

As I began plowing through old census’, it became more and more difficult to figure out who everyone was (and which family they belonged to) especially since many of them had the same first names! There are more James, Robert and Mary’s in my family than you can shake a stick at. What I didn’t know was that I was about to discover a few more just to add to the confusion…LOL

My biggest piece of advice to “would be” family genealogists: Record your information, family by family, in a spreadsheet on the computer right from the “get go”. Once I took the time to do that it made a tremendous difference. What I wasn’t prepared for were the number of changes I would have to make over the next few months before it was correct and complete.

It took me awhile to figure out how to go about finding information quickly. But as I have said many times since, "If there is one thing that doing a doctorate teaches you, it's how to research!". That skill came in very handy in the weeks and months ahead. However, the deeper I got into the past, the more "stuff" I discovered to confuse, frustrate and challenge me. I began to understand why some people take years to complete a project like this. You need the tenacity of a bulldog at times. Having a good reason for doing it doesn't hurt either!

Wrong dates of births, marriages and deaths. Incorrect spelling of names. No first names at all. Difficult to read handwriting. “Extra” family members (I would eventually find out that my great-great grandmother was listed as a daughter of my great-great-great grandfather when in fact she was his daughter-in-law!). Missing records. Lost locations of cemeteries or incorrect transcriptions of headstones. Just a few of the things that had me literally tearing my hair out on some days.

By far, the biggest “snag” I ran into was a lost census. I was so disappointed. I needed it to continue. Without it I could go no further. It had simply disappeared from the county records at some point and was no longer available.

“I’ve gone as far back as I can.” I lamented to my hubby and aunt. “Without this census, I can’t tell who belonged to which family. They had so many darn children in those days, it’s hard to figure out which Robert, James or Mary belongs to which family!”

I was at a dead end…

The photo below is a "sample" of one of the family tree pages that I put together for each of the 9 generations of our family beginning with my 5G’s grandmother Mary who was born in 1791.

This is the family page of my great-great grandparents. They had eleven children in all. Four of their children died in their first year of life (Mary, James, Eliza and Annie). One of their daughters (Sarah) died in her early 20's of pneumonia. 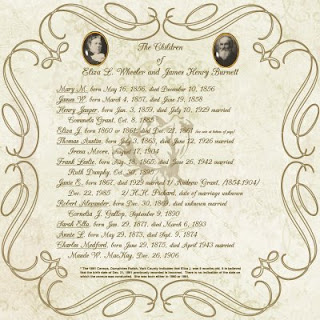 Miracles Do Happen… Don't Give Up!

I was at my wit's end. I wasn't sure what to do next. However fate and a good dose of luck was on my side...

A few weeks later, I discovered a name mentioned in the notes left by my uncle Wilfred before he died. Something felt familiar about this unusual name but I couldn’t put my finger on it.

I asked my cousins, my sister and my aunt if they knew who he was. No one had ever heard the name before.

“Honey, you’ll never guess what I found!” said aunt Flo a few days later. “An old letter from your aunt Joy written in 1998! I was rummaging around in one of my drawers looking for something and I found it. I can’t imagine why I kept it at the time. She mentions that “a fellow who lives in America” (my aunt Joy lives in England) had got in touch with your uncle because he believed that he was related to our family.”

She chuckled. “So there you have it. He lives somewhere in America, Miss Nancy Drew. Good luck finding HIM whoever and wherever he is!” she laughed.

I went to bed that night wondering if this “fellow” was the elusive “Alva”. “Hmmm, I think I’ll take a whack at it and see if I can’t find something on line. I wonder if he wasn’t doing some genealogy on his family too? ”

I woke up at the crack of dawn the next morning. Something told me to go online and look at the Family Search database from the Church of Latter Day Saints. I had been there before… right at the beginning of my research. I was just getting my "feet" wet at that point and didn't really know my way in the genealogy world. Had I perhaps seen his name before? Could it be there?

I started searching. Yes, by golly... there, buried among many others with the same first name was a man about the same age as my aunt. He lived in Idaho. Well that was America! LOL Could it be?

I searched some more and found an old request on one of the search boards from 1998 mentioning my great-great-great-great grandfather and his brother Robert.

Boy was I starting to get excited or what!

I continued my search and eventually found an address. More digging and I finally came up with a telephone number.

WOW! I was sure I had found HIM! There was only one way to find out.

By the time hubby came home from work that day, I was bouncing off the ceiling. I told him about my “finds” that day.

As nervous as I was about calling a complete stranger, I had made the decision to call him the next day. I wasn't sure how to start my conversation to inquire if he was the person I was looking for. I'm rather shy about approaching people I don't know.

The next morning, I stumbled through introducing myself on the phone. I must have mumbled something about why I was calling. Alva was patient as he waited for me to finish my “spiel”.

When I finally "shut up" LOL, he told me that he was just thrilled to hear from a long lost relative. We ended up having a delightful conversation chatting back and forth about our family connections.

Over the next couple of weeks, we exchanged a few emails. He kindly offered to send him all of his family information.

One bright sunny morning, a package was waiting for me in the mailbox. When I opened it, I could hardly believe my eyes. Not only had he sent me a copy of all his family research, he had enclosed a copy of… yes.... you guessed it… the missing census!

I jumped up and down for joy when I realized what it was. A relative in New Brunswick had made a copy of it years before and sent it to him.

Miracles do happen. Nancy Drew had found “her man” and solved the case. LOL

I now had all of the missing pieces to put the family puzzle together.

I called Aunt Flo. “Guess who I found?” I asked with a grin in my voice.

She just chuckled at my news. “Well I sure hope that one day you can put all of this information together to share with our family. I just can’t imagine how you can find all this stuff! It’s just amazing. Looking for Alva was like trying to find a needle in a haystack and you did it! I am so proud of you.”

Only later did she realize just how significant finding Alva was to completing the book I would dedicate to her..

Another page I included in the book was a poem I found on one of the family genealogy sites that really spoke to me as I laboured late into the night going through census after census. . I took the liberty of personalizing it (somewhat!) to our family. I thought you might enjoy reading it...

“It was the first day of census, and all through the land,
the pollster was ready, a black book in hand.
He mounted his horse for a long dusty ride,
his book and some quills were tucked close by his side.

A long winding ride down a road barely there
toward the smell of fresh bread wafting though the air.
The woman was tired, with lines on her face
and wisps of brown hair she tucked back into place.

She gave him some water, as they sat at the table
and she answered his questions – the best she was able.
He asked of her children. Yes, she had quite a few,
the oldest was twenty, the youngest not two.

She held up a toddler with cheeks round and red.
His sister, she whispered, was napping in bed.
She noted each person who lived there with pride
as she felt the faint stirrings of the wee one inside.

He noted the sex, the color, the age.
The marks from the quill soon filled up the page.
At the number of children, she nodded her head
and saw her lips quiver for the three that were dead.

The places of birth, she “never forgot”.
Was it Kansas? Or Maine? Or New Brunswick… or not?
They came from Ireland, of that she was clear.
But she wasn’t quite sure just how long they’d been here.

They spoke of employment, of schooling and such.
They could read some, and write some, though really not much.
When the questions were answered, his job there was done,
so he mounted his horse and rode off toward the sun.

We can almost imagine is voice loud and clear,
“May God bless you all for another ten years.”

Could they only imagine on that long ago day
that the entries they made would effect us this way?
If they knew, would they wonder at the yearning we feel
and the searching that makes them so increasingly real.

We can hear if we listen to the words they impart.
Through their blood in our veins and their voice in our heart.”

To end today’s post, here are the three “art pages” I did for my generation (the 7th) 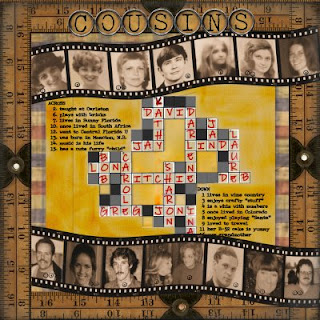 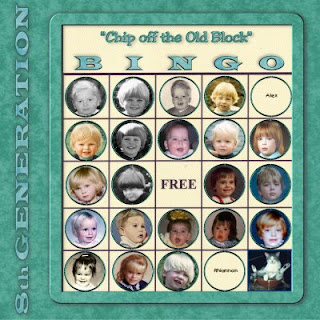 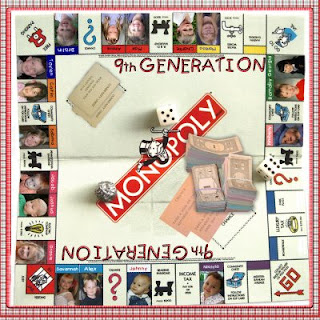 Thanks for stopping by today. See you this coming Saturday at the Valentine Blog Party!