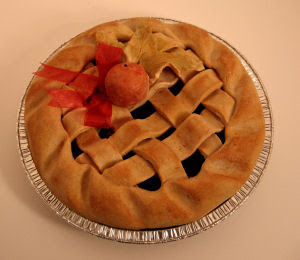 Last Saturday morning my ten pounds of peaches and forty pound box of apples arrived from the fruit farmer! Hubby’s eyes lit up. He licked his lips in anticipation and I swear I saw some drool escaping down the side of his chin. LOL.

It wasn’t rocket science to figure out what was going through his mind. My pie loving hubby had visions of hot peach or apple pie, flaky sweet pastry with a dollop of homemade ice cream and a cup of his "killer coffee" to wash it all down, spinning wildly out of control in his head. LOL

One of my Fall rituals each September is a marathon session baking pies. I have my Gramma to thank for that. She taught me how to make pie pastry when I was all of eight years old.

Gramma and Grampa lived on a very large dairy farm in northwestern Ontario that my French Canadian grandfather inherited from his father when he died, well into his nineties, in the 1930’s.

What a wonderful farm it was! Acres and acres of hay fields, a small fruit orchard and a vegetable garden filled with row upon row of corn, peas, potatoes, beans, tomatoes, cucumbers, parsnips, pumpkin, carrots, squash and turnip. Rows that seemed to stretch for miles and miles.

An old fashioned barn for the cows and the horses.

A long white hen house for mama hens and their chicks.

An ornery barnyard rooster named Big Ben named after the Big Ben clock in London, England. Need I say more? What a noisy character he was....

A building that served both as a root cellar for storing the fall harvest and ice house for cooling and storage of perishables.

A mud pit with a fence for Papa Porky, his wife Bess and their squealing little piglets.

A hay barn and place to store the wagons and farm implements when the day’s work was done.

A rambling, old farmhouse with many tiny rooms, a large attic filled with all sorts of goodies from years gone by (including great-grandfather's fiddle) and a gigantic kitchen with two long tables that probably sat at least 12 people each. I remember the old rocking chair that sat by the large wood burning cook stove. I was rocked to sleep in that chair on many occasions when I was really little.

A water well and bucket just outside the back door. And yup the outhouse was a bit further out in the backyard... with a fancy curtained window in the door no less!

A long porch with rockers and chairs for sunset sittin’ and watchin' before bedtime. Grampa was up at 4 in the morning to milk the cows before they went out to pasture. He "hit the hay" pretty early each evening.

A miniature "farmhouse" and tiny flower garden filled with pansies, daisies and sweet peas. Such a lovely playhouse built by a proud grandfather (my great-grandfather) for his first granddaughter.

It was to this land and home, a handsome young man with a delightful French accent brought his pretty, Minnesota bride to live and raise a family prior to WWI.

In the early 50’s Grampa built a modern, new house with a small “tearoom” porch for Gramma just up the road. Gramma just loved her new house even though she complained every now and again that the kitchen was “too small”… she couldn't fit 12-14 people around the kitchen table at one time now! It was in this kitchen that she taught me the “art” of making pastry.

For as long as I can remember, I have loved apple pie and homemade ice cream! When we went to visit, Gramma always made sure she had a freshly baked apple pie sitting on the sideboard waiting for me. Grampa, of course, always needed help to finish off churning the ice cream. He needed a “tester” to quickly dip a small index finger into that cold, cold mass of cream and sugar and have a taste. This, of course, was just a “precaution” to make sure the ice cream was really ready.

Each summer, my cousin Lanny and I (we are close in age) would get to spend a couple of weeks on the farm with our grandparents just as our three older “girl” cousins (now teenagers) had done when they were our age. Not only would we get to gather the eggs, feed the chickens, pick vegetables and fruit or play in the old playhouse my great grandfather had built but we got to go on the tractor out into the fields with our grandfather or help gramma in the kitchen. It was the highlight of our summer school vacation.

During harvest time, the farm bustled with activity and people! The “clan” of aunts and uncles, farmhands, and friends all gathered to bring in the bounty and put it up for the winter ahead. While my mother and her sisters canned fruit and vegetables in the old farmhouse kitchen up the road (it was wired for electricity in the 1920’s), Gramma, aided by her granddaughters, would get busy in the new farmhouse preparing the evening feast for a crowd of ravenous “workers”. Pies, made with a variety of fillings and freshly churned butter, were always on the menu!

Each fall, these wonderful childhood memories come flooding back to me. As I put on my apron and get out the butter, shortening, flour, sugar and cinnamon, eggs, cream, pie tins and my gramma’s old rolling pin, I am magically transported back in time to gramma’s kitchen! My grandmother is my kitchen angel at pastry making time. Even though she died suddenly when I was just twelve, I can still feel her presence and hear her voice instructing me in the fine “art” of creating flaky, delicious pastry.


Last weekend, I doned my apron and had a marathon pie making session ! I made eight peach pies and some homemade vanilla ice cream on Sunday. So far this week, I have made another 22 pies… cinnamon apple, cinnamon apple/blackberry and apple/raspberry… all but three of them headed for the freezer to enjoy at Thanksgiving, Christmas and over the winter.

My hubby is a very happy man. All is right with the world when there’s pie in the oven and the house smells of cooked apples and cinnamon when he walks through the door at the end of the day. I love all the appreciative compliments I get when he takes his first sniff and looks at all the pies cooling on the counter. He never fails to praise the pastry as he savours his piece of pie after dinner! LOL

Now just to prove that I am not fibbing… here’s a photo of half the top shelf of my freezer….double stacked with 20 pies... the remaining were still cooling when I took this photo 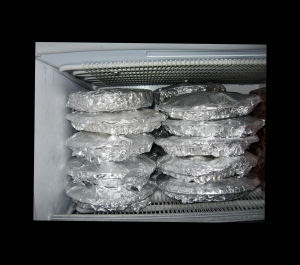 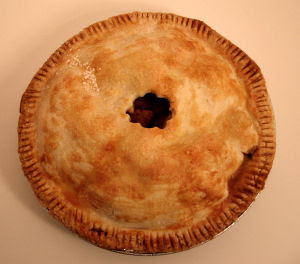 Now… if you aren’t into making pastry, here’s an art project for you.

But first a humourous little story.

Remember that photo of the apple pie at the beginning of this post? Well...

One of my husband’s uncles loves my apple pie and raves about my pastry. I swear that man can smell it all across town because he usually shows up for a "cuppa" (a cup of tea), out of the blue and unexpectedly, just as they are out of the oven and cooling on the counter.

One afternoon he stopped by for tea and saw that same pie at the beginning of this post, sitting on my counter. We chatted about this and that and I noticed how he kept stealing a sideways glance at it. But he said not a word about the pie.

Finally he could stand it no longer. “Do you think I could have a slice of that nice apple pie you made?” he said boldly.

"Oh, just a little piece will do!" he said, licking his lips in anticipation.

Well the jig was up. I told him the truth. He just roared with laughter when he found out it was a “fake” apple pie. He has never let me forget it!

Want to try your hand at making an apple pie top? Make a batch of flour and salt playdough. Cut out strips and weave them together to form the top of the pie. Decorate the pie with an apple and leaves made from the "playdough". Place it on the middle rack in your oven (about 225 degrees) until its dry. This can take some time at this low heat, so just be patient. It will look "cooked" when it's fairly white with no moist spots. Remove it from the oven with oven gloves. It will be hot!

Let it cool, preferably overnight, then ink the “cooked” pie crust and apple with vintage ink. Fill the aluminum pan beneath it with cinnamon pot pourri and hot glue the crust to the pan. It will make your kitchen smell wonderful and you'll probably fool your best friend with your newly acquired, fantastic pie making abilities!

Best get busy. I still have a third of a box of apples to deal with!! Hmmm… guess I’ll make some southern fried apples to have with the pork chops tonight. Maybe I’ll make enough to bottle up for over the winter too… or what about some apple mint jelly for lamb… or a filling for apple crisp… or maybe some apple chutney for curry… or .....