The Ghost of Victoria's Most Famous Architect - Francis Rattenbury

If you enjoy tales of ghosts, eerie hauntings and strange sightings, an opportunity to experience one of Canada’s most haunted west coast cities… Victoria, B.C. …on Halloween has to be one of the best reasons to make your way to this island city on the last day of October in any given year.

There are dozens of spots in the downtown core and beyond that are said to be haunted. One of the more familiar stories is that of a tall, dashing, handsome chap with a moustache who lurks in the stairwells of the Empress Hotel.

A beautiful, grand hotel at the head of Victoria Harbour, this historic hotel opened in 1908. Designed by the architect Francis Rattenbury, many people are immediately smitten by their first glance of this hotel’s majestic, old world charm. Little do visitors to Victoria know that the ghost of B.C.’s most famous architect, whose life ended in scandal and tragedy, has been seen on numerous occasions, roaming the splendid wood staircases of the Empress Hotel. 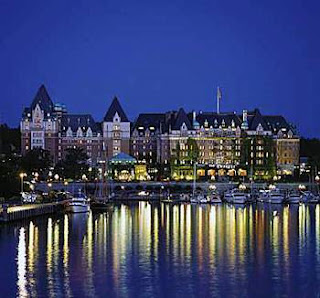 Francis “Frank” Rattenbury arrived in Victoria in his early 20’s and set about creating a name for himself in Victoria Society. Shortly after the Legislative Building (one of Rathenbury’s first of many architectural triumphs that still stands on Victoria’s harbour) was opened in 1898, Frank married Florence Nunn.

The daughter of a retired British Indian Army officer turned prospector, many of Victoria’s young maidens gossiped behind closed doors at the time of their engagement wondering what this successful, handsome and most eligible of Victoria bachelors could possibly see in the very plain Florence. Nevertheless, Rathenbury did marry Florence in a June wedding and they went to live in a beautiful beachfront home in Oak Bay. They subsequently had two children, Frank and Mary.

Rathenbury’s professional success made him the darling of Victoria society. However, trouble was brewing behind closed doors in his Oak Bay home. On a personal basis, “Ratz” was often thought of by his peers as an “ill tempered” and “mean” man who was extremely frugal with his money. This side of his personality quickly reared its ugly head.

Florrie and Frank soon discovered that they were ill suited to each other. In the years following, they grew to dislike each other intensely. Despite this sad state of affairs, they continued to live together. Ratz, now drinking excessively, took up residence in separate quarters of their home. It is said that in later years he refused to even speak to his wife directly and only communicated with her through their daughter.

One evening in 1923, at a dinner in his honour at the Empress, Rattenbury, now in his mid 50’s met Alma Parkenham. Still in her early twenties, already once widowed and once divorced, Alma was a beautiful, accomplished pianist, composer and musician visiting Victoria from Vancouver to give a piano recital.

Frank was instantly smitten by this vibrant, daring, young (and for the times, loose) “flapper” woman who reportedly drank and smoked openly in public! Within days, the pair were embroiled in a publically open, torrid love affair much to the dismay of the elite in Victoria society.

The tongues of Victoria’s upper crust wagged furiously when Frank and Alma began appearing at social functions together, apparently oblivious to public opinion and with scant regard for Florence’s feelings and reputation. The titillating rumours circulating in town, about Alma in particular, were numerous, harsh and cruel.

Within a short period of time, Frank approached Florrie and asked for a divorce. Florrie refused. Frank, not about to give up his mistress, began entertaining Alma nightly at the family home in Oak Bay, no doubt hoping that Florrie would quickly change her mind. She did not.

Frank, now becoming desperate to be rid of Florrie, upped the stakes. He began to harangue her with decidedly cruel behaviour. He invited Alma for overnight stays at their home. Florrie was forced to listen to their squealing lovemaking accompanied by loud drinking and drug use.

When Rattenbury realized this was not getting him the desired result he sought, he decided to move out. His parting “gift” was to have the heat and lights turned off in their home. Tired, heartbroken and deeply embarrassed by the antics of her estranged husband, Florrie finally gave up. She agreed to his request for a divorce.

Frank and Alma married in 1925 as soon as the divorce was final. His reputation in ruins through the scandalous affair with Alma, he was publically shunned by his former clients and colleagues. With commissions no longer forthcoming, his finances suffered greatly.

The couple became social pariahs. They were no longer invited for dinners, parties or the theater. Shunned on the streets of Victoria by the social elite, people no longer spoke to either of them.

In 1929, they decided to move to Bournemouth, England for a fresh start. He and Alma, along with their infant son, left Victoria for good.

The move to England did not bring the hoped for betterment in their finances and social standing. Financially strapped, Frank’s relationship with Alma, who loved to spend money, began disintegrating. Bitter and despondent, he quickly turned into an impotent, alcoholic old man who sat hour after hour in a dimly lit room.

Alma, on the other hand, still young and enjoying some success as a composer and musician, craved excitement. With her usual carelessness, this 38 year old woman began an affair with George Percy Stoner, an 18 year old high school dropout Francis had hired as a chauffeur.

One night in 1935, while sitting in the drawing room in a drunken stupor, 67 year old Rattenbury was murdered from behind. Several blows to his head with a carpenter’s mallet quickly rendered him unconscious. He remained unconscious for a number of hours and then died in hospital. Alma and Stoner immediately came under suspicion. Murder charges against the two for the gruesome crime followed quickly.

The sensational trial, laced with all manner of titillating sex, drugs and tales of infidelity lasted five days. As a witness, Alma “described how, trying to bring her husband round, she first accidentally trod on his false teeth and then tried to put them back into his mouth so that he could speak to her. … Mrs. Rattenbury said when her lover got into bed that night and told her what he had done, "My first thought was to protect him." In the end, Alma was acquitted of the charges. Stoner, on the other hand was convicted and sentenced to death.

Was Alma distraught at the thought of losing her lover to the hangman? Had she committed the murder herself and was now riddled with guilt? With her reputation permanently destroyed and faced with the prospect of living the rest of her life in disgrace, was she consumed with guilt and shame? We shall never know. She committed suicide four days after the verdict. She stabbed herself repeatedly in the heart, fell into the River Avon and drowned. Her body was discovered within hours. There was no note. The headlines in the London newspapers were said to be the most dramatic and sensational since the sinking of the Titanic.

Meanwhile, the public was outraged at Stoner’s verdict. They blamed Alma for leading him astray and corrupting this young lad with “undue influence” and her sexual charm. A petition for clemency, signed by thousands, was presented to the courts and the Home Secretary agreed to commute Stoner’s sentence to life imprisonment. He served seven years for the murder of Francis Mawson Rattenbury.

And Frank… well I believe he still roams the staircases of the Empress in his long, black frock coat begging for forgiveness… hoping to redeem himself for his ghastly treatment of Florence, seeking to repair his tarnished reputation with the public and his peers, wishing he had never crossed paths with the likes of Alma!

Copyright 2008 Sharon House. Please do not use for either oral or written presentation without written permission from the author.
Newer Post Older Post Home