Much Ado About Mucha - Part 2

The Shopping Face Off…
The sport of ANY KIND of shopping with hubby is like a face off in a hockey game. The puck drops. You’d better be paying attention and ready to move fast.

I was. Around the corner and into the first “room” of the antique store I went… lickedy split. It took exactly one minute for me to spot something that caught my eye.

Sitting on the corner of a lovely old sideboard were four small, elongated white boxes. The writing on them was in German, which immediately drew my attention. Although my spoken command of the language has become rusty over the years from a lack of opportunity to use it regularly, I can still read and understand it almost as easily as I do English. Not bad for a “Heinz 57 kid” with a Scots-Irish-French-Swedish background huh? (The truth is I lived in Germany for a number of years in my 20’s and 30’s and became fluent in the language while living there.)

The manufacturer’s “mark” and name on the outside of the box read “Hutschenreuther Porzellan”, a name I recognized as a German maker of fine porcelain. Next to the writing was an art print of an artist I could recognize from a mile away – Alfons Mucha.

Both my husband and I are longtime Mucha fans. A number of years ago, we purchased some beautiful museum quality prints at a showing of his original works in the Raleigh, North Carolina Art Gallery. We had them framed as a grouping and have enjoyed these gorgeous prints on our “art gallery wall” in our living room ever since.

Allow me to digress for a moment and give you some background on Alfons.

As a struggling and relatively unknown Czech artist living in Paris, Alfons Mucha achieved immediate fame when, in December 1894, he accepted a commission to create a poster for one of the greatest actresses of the time, Sarah Bernhardt. Though the printer was apprehensive about submitting Mucha´s final design because of its new, unconventional style, Miss Bernhardt loved it. So did the public. ´Le style Mucha´, as Art Nouveau was known in its earliest days, was born.
The success of that first poster resulted in a 6 year contract between Bernhardt and Mucha. In the following years, his work for her and others included costumes and stage decorations, designs for magazines and book covers, jewellery, furniture and numerous posters. If you’re interested in finding out more about Mucha and his art, click here

I picked up the first box. It looked brand new. Carefully, I opened it. Inside was a beautiful china panel plate of Mucha’s decorative panel, “Autumn” from “The Four Seasons” series.

I called my husband over to admire it. He looked at it and liked it so much that he picked up the next box. He opened it to take a look. When he put that one down, he opened the last one, I knew these found “treasures” had captured his undivided attention.

It didn’t take us long to discover that none of panels had likely ever been mounted on a wall or sat out in a cabinet. Not a chip, fading or other “previously loved” mark was to be found anywhere. They probably hadn’t been out of the boxes they came in since the day they were originally purchased.

We chatted back and forth about them for a few minutes. The workmanship and colour in the plates was splendid. My husband was interested in determining the quality of the china manufacturer. I assured him that Hutschenreuther was on par with other china names that he could recognize…Royal Dolton, Wedgewood and Rosenthal. Neither of us had a clue whether the price ($80.00 for the set) was fair or not.

“Who cares,” said the man of the house. “Even if they aren’t old or even worth the price they want for them, I really like them. Hard to resist Mucha. They are beautiful china panels. I’ll buy them anyway. Maybe I can get a few bucks knocked off the price of the set when I pay for them.”

He picked up all four boxes and tucked them under his arm. We looked around some, then headed for the cash register desk. He chatted with the owner about the panels and ended paying $69.00 for the set. He was pleased as punch with his purchase. Within a few days, he would find out just how pleased…!

The four china panels. I am afraid they aren't the best photos in the world in spite of my efforts... and I just realized that I cut the bottom off the bottom photo when I resized it.... darn,,, and I don't have time today to re-do them. The photos really don't do them justice but I did discover that it is not as easy as I thought to photograph china! 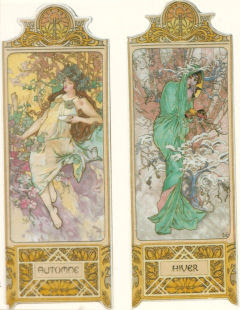 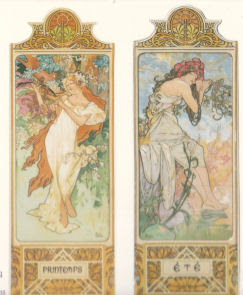 Later on that evening, husband went on line to see if he could find out more about his newly acquired “treasures”. He didn’t have much luck other than to discover that the manufacturer, Hutschenreuther, became part of the Rosenthal division of the Waterford Wedgwood Group in 2000. That was news to me too.

A couple of days later, I decided to do some further digging for him on some of the European sites on line to see what I could find out. Being able to read in a couple of foreign languages really helps when cruising websites that don’t have a translator on them.

It didn’t take me long to find out when they were manufactured. I looked up the mark on the back of the panel. 1970… hmmm, they weren’t as new as we thought they might be.

Digging deeper, I found two expired European e-bay listings… one in France from last year and the other in Switzerland from this past spring. I did a double take. On both sites, the exact same set, same year mark, in their original boxes, had sold for more than triple what he had paid for them!

When husband arrived home from work, I told him the results of my “sleuthing” on his behalf. The look of pleasant shock on his face followed by a big grin said it all. He was excited and absolutely delighted! Not that he would ever sell them. Not that he had even got them at a bargain price. Nope. Somehow I got the sense that with his first “score” he was bitten by the “antiquing bug”.

Hmmm… I wonder how many other antique shops I could entice him into now?
Gonna close for now… I have to do an internet search. Gotta find me some antique shops around the island we can go to!