I had some wonderful, exciting news the other day ... two of the roomboxes (although I call my boxes, bookshelf boxes as they are meant to sit in a bookshelf among books... rather like a surprise when you discover them...) made it into one of the premier juried art shows, the Sidney Fine Arts Show, here on Vancouver Island in mid October.

Out of over 1000 pieces that were adjudicated for the show, they took 400... 2 of which are mine.  I have never seen any miniatures/small stuff that have made it into the show before (other than one other of mine that made it in last year but it wasn't a bookshelf box) so I am over the moon!

Once the show begins, I will post more photos (the show organizers don't like it when you spoil the surprises awaiting folks who come to the show).  I have to admit that the photos don't really do the boxes justice...they are a lot smaller than they look in a photo.

The other day a friend who had dropped by for a visit began "studying" them.  She had seen some of the preliminary photos I took along the way and said, "Boy, you are right. You just don't notice all of the tiny details in a photo (the devil is in the details and it is the details that absolutely make the pieces come to life) and photos just can't show the size and depth of the 3D effect!".  I totally agree. However, I think you can certainly get an overall impression of them nonetheless.  That being said, here are a couple of photos to give you a sense of what I sculpted and created...and yes, it was a lot of work, took a lot of time but was so much fun watching it all come to life...

This first photo is Dr. McPherson, the English Professor who is a visiting Oxford Don... he has traveled the world and now loves to just sit around and share his vast knowledge of literature and the world with his students... in the bookshelf box, he is surrounded by over 60 miniature books and of course his suitcase and satchel... 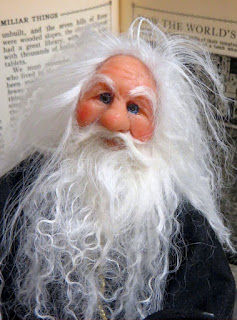 You recognize this guy below, don't you?  Who could miss him with his wild hair?  I am an Einstein fan... if you ever want an Einstein quote, let me know, I have hundreds of them. This bookbox was made to commemorate the Centennial of the publication of Einstein's theory on relativity (1915-2015).  The bookbox is an artfully rendered version of Einsteins office at Princeton.  Einstein had a delightful sense of humour and some of his quotes are quite insightful... especially the one about the constant state of mess on his desk:  "If a cluttered desk is the sign of a cluttered mind, what then is an empty desk a sign?"  Yes, indeed!  I will leave my desk in a mess from here on in...GRIN 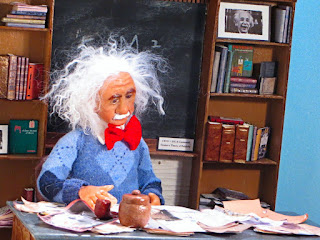 The Sidney Fine Arts show runs from Oct. 16-18 at the Mary Winspear Centre in Sidney, B.C. (Elizabeth May country...*) so if you are in the area, drop by to take a look at some wonderful art from Vancouver Island artisans.

Stay tuned... photos will be forthcoming...

* P.S.  Who is Elizabeth May you ask?  Well she is one effervescent, fiery, and very smart female politician who is the leader of her party (the Greens) currently running for office in her district, Sidney/Gulf Islands, in our on-going, long drawn out, (and for me) totally boring Canadian election.  She lives in Sidney and is one cool lady!!
Newer Post Older Post Home