Happy Halloween everyone!  This week I have a fun, ghost story from the Pacific Northwest by one of my favourite "storytellers" Margaret Read McDonald AND a preview photo of the "Haunted Halloween House" I made in polymer clay and set into a frame. 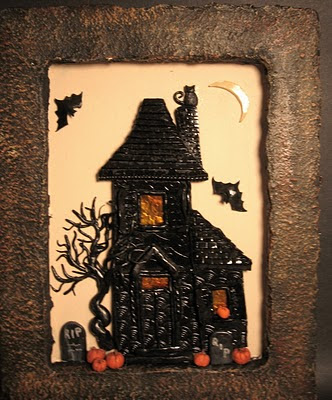 What a lot of fun it was making this house!  Our friends, Scott and Sandy, are great Halloween fans and go all out with decorating their yard.  It was a source of inspiration for me when putting this polymer clay house with its embellishments together.  ﻿
According to hubby, the pumpkins look downright REAL and he loves the bats swooping across the sky.  I was a little disappointed in the moon... UNTIL... I turned the lights off.  Made from "glow in the dark" clay, I was amazed at how long you could see the moon in the dark!  The windows are made from a transparency with alcohol ink dribbled on it and then backed with silver paper.  The rough frame was made from paper mache clay and then painted with metallic paints.
Of course, every haunted house deserves a spooky ghost story to go along with it.  With that in mind, here is a wonderful "true" short tale from the Pacific Northwest.
The Femme Fatale of Rosario Resort
Orcas Island, Washington

Rosario Resort on Orcas Island occupies the former mansion of Robert Moran. In 1939 the mansion changed owners and a flamboyant lady by the name of Alice Rheem took residence. Rumour has it that her husband bought the remote property as a useful place to ensconce Alice and her drinking habit. She became a familiar figure on the island, riding around on a motor scooter, often after one drink too many, sometimes dressed only in her red nightgown. And she was known to have a proclivity for handsome young soldiers, bringing them back to the mansion whenever her husband was away. Alice eventually died in the mansion, supposedly a victim of too much drink. But she seems not to have left quite yet.

As recently as 1986 Alice was causing havoc. A tired housekeeping employee bedded down in an empty room in the mansion one night rather than drive home. Just as she was dropping off to sleep, she noticed a shadow pass across the wall. Turning on the light, she saw nothing. But the shadow moved again and something touched her hand. She waited and seeing nothing was about to trun off the light and go back to bed when she felt fingers caressing her hand. The girl bolted from the hotel, tossing the key to the desk clerk. "There's something in that room!" He shrugged, put the key back on the hook, and noticed that it was midnight.

As it happened, a trio of entertainers had been staying in the room next to her that night. They complained as they dropped off their key in the morning. "How long will that woman be staying next to us?" The desk clerk assured them that she had already left at midnight, the night before. But the entertainers had been kept awake all night, they said, by her carousing. Just before midnight they'd seen the light under the door go on and off three times. then the bed began to creak and the moans of passionate lovemaking started up. they were kept awake all night. The key to the room still hung on its hook and the desk clerk hadn't given it to anyone else. The hotel staff suspect that Alice was at work.

P.S.   I decided to extend the time to get the  "Halloween Hilda" ATC Tutorial  under Current Free Trade Downloads to November 5.  If you would like this ATC tutorial package, Get it NOW as it will be retired on Nov. 5 and no longer available!!  Click on Current Free Trade Downloads link under the header at the top of this page to read how you can get this tutorial.
Newer Post Older Post Home