He was a strapping, young farmer eleven years her senior when he walked into Ina’s life.

Foot loose and fancy free and in his mid thirties, he was said to be a little on the “wild side”. Good looking, fond of “the horses” and not adverse to pitchin’ back a brew or two with his buddies at the local pub, he had an aura of charm and excitement about him that was dangerously attractive for a shy, quiet, young widow. There is no record or family stories of exactly when and where they met. 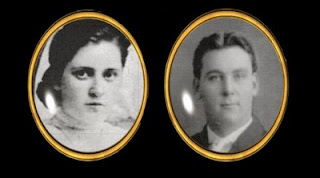 From the time of her first husband’s sudden death, Ina lived at home with her young daughter, her father and younger sister Alida. Both of her brothers had left home, bound for university in the United States.

It must have been a lonely, secluded life for a young widow without her brothers around to protect and watch out for her.

Her brother Goldie had attended the Provincial Normal School and began teaching in 1901. In 1905, he decided to follow in his father’s footsteps and become a doctor. He left New Brunswick for Kansas where he received his BA in 1909. He then moved to Oklahoma to finish off his studies at the University of Oklahoma and became an MD in 1914 He returned to Kansas to set up a practice, likely (and this is a good guess based on my research) to continue his romance with Belle McKaughan, a vivacious young Kansas gal he may have met during his university years there.

Her brother Hannington, the “baby” of the family, was an energetic and ambitious young man as well. After attending the University of New Brunswick, he decided to follow in his father’s and brother’s footsteps and become a doctor as well. He left home to attend the same universities as his brother before him. After receiving his MD degree, he returned home to marry Cora Redstone, a young woman from a neighbouring county.

At some point, he and Cora (both devoted Baptists, just as their respective families were) decided to become missionaries. Posted to the Belgian Congo, both died there of a tropical disease (likely malaria). The dates of their deaths are unknown.

Sometime between 1912 and 1915, Ina found romance in the arms of the charming, husky Jasper Wesley Burnett.

With her brothers away, an aging, grieving father and a fatherless child, Ina was likely quite anxious about her future. It is not known whether her family approved of the budding romance or not.

Who was Jasper Wesley Burnett?

Jasper came from an old, established farming family. His ancestors had arrived in New Brunswick from Ireland in 1824 and were among the first families to settle in Dumfries Parish, York County New Brunswick.

Unfortunately, no photos exist from this time. I don't know off hand when cameras were invented but I am betting it would have been a very costly affair to have photos taken for posterity.
Piecing together my research when it was complete, I wrote a “wee” Irish tale that spanned two pages in “Scraps of Memories, Slices of Life” to record our ancestors arrival in New Brunswick. Here is the first page… 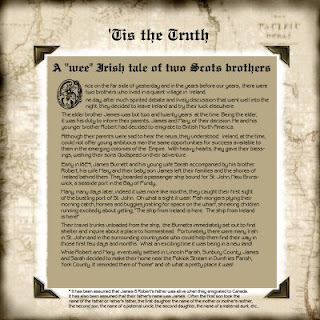 “Once on the far side of yesterday and in the years before our years, there were two brothers who lived in a quaint village in Ireland.

One day, after much spirited debate and lively discussion that went well into the night, they decided to leave Ireland and try their luck elsewhere.

The elder brother James was but two and twenty years at the time. Being the elder, it was his duty to inform their parents, James and Mary of their decision. He and his younger brother Robert had decided to emigrate to British North America.

Although their parents were sad to hear the news, they understood. Ireland, at the time, could not offer young, ambitious men the same opportunities for success available to them in the emerging colonies of the Empire. With heavy hearts, they gave their blessings, wishing their sons Godspeed on their adventure.

Early in 1824, James Burnett and his young wife Sarah accompanied by his brother Robert, his wife Mary and their baby son James left their families and the shores of Ireland behind them. They boarded a passenger ship bound for St. John, New Brunswick, a seaside port in the Bay of Fundy.

Many, many days later, indeed it was more like months, they caught their first sight of the bustling port of St. John. Oh what a sight it was! Fish mongers plying their morning catch. Horses and buggies jostling for space on the wharf. Shrieking children running excitedly about yelling “The ship from Ireland is here. The ship from Ireland is here.”

Their travel trunks unloaded from the ship, the Burnett brothers immediately set out to find shelter and inquire about a place to homestead. Fortunately, there were many Irish in St. John and in the surrounding countryside who could help them find their way in those first few days and months. What an exciting time it was being in a new land!

While Robert and Mary eventually settled in Lincoln Parish, Sunbury County, James and Sarah decided to make their home near the Pokiok Stream in Dumfries Parish, York County. It reminded them of “home” and oh what a pretty place it was!”

In the early 1850’s, Jasper’s grandfather James, purchased a tract of farmland near the St. John River “on the road to Canada” and moved his family to Kingsclear (now Garden Creek, a neighbourhood suburb of Fredericton, New Brunswick).

The eldest child of three, Jasper, lived on the family farm in Kingsclear where he was born in 1886.

As the puzzle pieces about him came together, thanks to my conversations with my aunt, I finally understood where the “wanderlust” of my younger years and the strong need for “freedom” I still have, likely originated from…. my grandfather! I never knew my grandfather, he died long before I was born, but it was an “eye opener” for me that made perfect sense.

My grandfather was someone who had “itchy” feet. He treasured his freedom to the point of being irresponsible at times (thanks heavens I didn’t inherit that side of him). He had a daring, devil may care streak in him that caused my great grandmother many a sleepless night. His personality was such that if he found himself in a jam, he would successfully charm his way out of trouble. He was, as my aunt said one day “one of those fellows you’d like to just strangle for the things they do that just infuriate you to death. One minute gramma would be as mad as the dickens at my dad and the next minute, all of us, including her, would be laughing and throwing our arms around him… all forgiven… and glad he wasn’t mad at YOU!”

Yep, I have known guys like that in my lifetime! I nearly married one! WHEW! Thanks heavens I didn’t.

But in the spring of 1915, Jasper found himself in a sticky situation that wasn’t so easy to just dismiss and charm his way out of. Ina was pregnant. His wild and woolly “bachelor” days were over! He’d sown just one “oat” too many. LOL

Ina and Jasper were married on June 7, 1915 in St. John, N.B. I am guessing, but something tells me that they eloped before they broke the news to their respective families. I can’t put my finger on why I think that. It just is one of those “things” we feel deep down that we know..
Surprise… Surprise…

As my research on RootsWeb got into full swing, I began to realize that when you shake the family tree, be prepared to get “bonked” on the head with apples that fall from the ancestral tree. LOL

Imagine how surprised I was to discover their marriage record and realize that it had been a “shotgun” wedding. My aunt Joy told me later on after the book was published that Uncle Wilfred had not realized that he was conceived "outside the blanket" until he started gathering the information for his branch of our family tree just before he died at ninety-one!

The second revelation -- it wasn’t my grandfather's first marriage either. This was news to me! I had never heard anything about this when my Dad was alive.

Looking for the death certificate of another family member in the Province of Ontario online records, I had stumbled across the record of Jasper’s first marriage.

In 1908, when he was 22, he had married a young woman by the name of Cecilia Dommer in Port Arthur, Ontario.

“Did you know that your father was married once before?” I began.

It turned out that she did. She hadn’t really given it much thought in 73 years!

“Your Dad may not have known about it.” she said. “Gramma told me just before she died. I had completely forgotten about it until you asked. What was her name? I don’t recall.” she asked.

“Yes, that's her name all right. All I remember was Gramma telling me that my dad had gone west to Ontario (I found it amusing that going from New Brunswick to Ontario was considered “going west”) and had met her in Port Arthur. She was really surprised to get a letter from him a little while later saying that he had married. I don’t know what happened… whether she died or they got a divorce. I just know that Gramma just shook her head back and forth when she told me. She said I should know. My Dad was her “wild child”, you know.”

A Child is Born…

In November of 1915, Ina and Jasper's first child was born at the Burnett family home in Kingsclear. He was christened Wilfred Jasper.

During my research, my aunt Joy told me that my uncle had hated his name all of his life! He understood the Jasper part but he was never sure why he had been “saddled” with such a wretched first name. As a young man, he changed it to “Wilf”… all the while wishing they had called him something nice like Robert.
Newer Post Older Post Home