An Art Journey Into Family History


It all began with an offhand remark in a conversation on a bright, sunny July day of 2007.

“You know sweetheart, the one thing that has haunted me my whole life is that I have never seen my mother’s grave. I was so young when she died, I don’t even know which cemetery she is buried in. Will she even know who I am when I see her again?” said my 86 year old aunt.

My auntie had been a constant person in my life since I was knee high to a grasshopper. A loving, caring woman who helped me survive my teenage years. My shoulder to sob on when I was terribly hurt by my “first love”. My buddy to laugh and joke with when times were good and I was “on a roll”. My confidante when things went sour and I needed her sage advice and wisdom. My friend to share my innermost thoughts with on life, love and the pursuit of happiness no matter the time of day or night or on which side of the pond (Europe or North America) I was living on.

I didn’t have an answer to her question. But I did experience a flashback to a memory of visiting my grandmother’s grave some years before.

I was attending a conference in Nashua, New Hampshire accompanied by my hubby. I knew Gramma was buried in Amherst, New Hampshire, just a short distance away. Before we left for the conference, we had decided this was a great opportunity to go to this lovely New England town and attempt to find the cemetery where Ina Bertha Burnett was buried.

It took a bit of planning to determine where to start first but luck was on our side!

With no clues to go on, we went to the little church graveyard in the middle of town to start our search. We scoured all the grave markers looking for her name. No luck!

Fortunately, a man, tending a grave nearby, overheard our conversation about what or where to go next. A native to the area, he told us that there was another very old cemetery “on the road to Milford” that we might try.

“Milford”. Yes. That name was buried in the recesses of my memory bank. I distinctly heard the distant voice of my Dad saying “on the road to Milford.” I don’t remember the conversation. Just this tiny “snippet” of information from a “family story” I heard as a child.

Hubby asked for directions (how about that for a guy who categorically never asks for directions? LOL) Within fifteen minutes, with a few wrong turns to spice up the ride, we found her resting place tucked away in what was once farmland and is now a pretty neighbourhood on the outskirts of town.

Standing at the grave of someone I had heard about all my life but had never met touched me deeply. A warm surge of tenderness mingled with sadness welled up in me for a woman I had never known as a living person. Tenderness for a life cut so bitterly short. Sadness for the seven young children she had left behind. A rush of inner connectedness to the soul of this woman pierced my heart. In my mind’s eye, I could see her standing before me. She smiled. She was pleased. A grandchild who bore her name had stopped by to visit and bring her flowers.

“Gramma is buried in a lovely old cemetery on the road to Milford”, I began. I proceeded to tell aunt Flo about visiting her mother’s grave and my experience while I was there. She asked if I had taken a photograph. Sadly, I hadn’t. It just didn’t cross my mind at the time.

“I know that your auntie Georgie visited her grave when she lived down east but she didn’t take a photo either or if she had one, I never saw it. I was so mad at her before she died. She tore up all of her pictures, including some she had of our mother. Didn’t even ask if I might like to have them. She ripped up her playbills from when she was singing with the Met. She tossed out all the stuff she had from her overseas trips during the war and even broke all of her old records she had recorded. I guess I like to think my old heart would feel better even if I just saw a photo or something.” she sighed.

My inner note taker shouted at me. ”You can fix this. Get a photograph for her.”

As soon as I got off the phone that day, I went online to do some sleuthing. YES! There was a genealogical society that, with some luck, could help me out. I wrote an email, explaining the situation giving them the few particulars I had. With some Irish luck, I’d be successful.

I heard back within a few days. Yes, they could help. They had forwarded my email to the town genealogist with a request to get in touch with me.

I heard from the town genealogist a few days later. I was giddy with excitement as I read her email. In it, she mentioned that she had always wondered about the woman buried in this grave and what had eventually happened to the family. It had been a mystery she had not been able to solve since taking over the job as town genealogist 25 years before! Of course, she would take a photograph and send it to me for my aunt. Just give her a couple of days and some “sunny weather” to get a nice photo.

Imagine my delight when I received her next email. I had hit the “mother lode”! Not only had she taken photos of my grandmother’s grave, she had taken it upon herself to do some additional research as well. 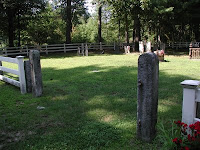 She discovered the location of the old barn and farmhouse where they had lived (it was still standing and hardly changed at all) and enclosed photos. She found the entries for the births of my aunt, her baby sister Ina and her younger brother Jim. 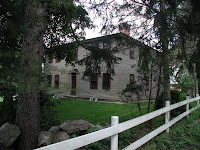 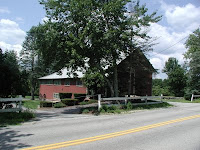 Subsequent emails included information and photos of the first school (still standing but now a private home) that my dad and uncles had attended.

As I looked at the photos, the idea of just sending the photos to my aunt didn’t seem enough. I had a moment of divine artistic intervention. “I’ll just make a couple of art pages on the computer to pretty up these photos.”

That settled, I turned on my computer and fired up my graphics program. Yep, it felt right to do this. Auntie Flo would just love to get some “arty” pages from me. She was my biggest fan when it came to praise about my art. She’d be pleased as punch to have something to look at.

Hmmm what about some storytelling? She loves stories. “So what good story do you have for me today?” was often the first thing she asked when I called.

I liked the idea of including some family history narrative. That way she could read the “story” in black and white. Maybe it would help her in her quest to answer the myriad of questions she had shared with me in different conversations over the years: “What was my mother like? Who was she? Where is she? Who am I? Where did I come from? Where did I live? What did our house look like?” Questions So many important questions that had been begging for answers and resolution for years.

I will forever be most grateful and thankful to Jackie Marshall, the town genealogist who sent the photos and information to me. Her caring thoughtfulness coupled with my aunt’s chance remark set the tone for the continuation of a journey that had started many years earlier. Little did I know at the time the extraordinary discoveries I would make on the journey that lay ahead of me.

Bitten by the Curiosity Bug…

The photos and information piqued my curiosity. That curiosity (my GPS on my road of life LOL) nudged me towards exploring the meandering path of genealogy and our uncharted family history. It mapped out routes that turned into magical experiences. Posted detours along the roadway filled with tears and sadness. Erected roadblocks of frustration, anger and melancholy to test me. Suggested side roads filled with discovery wonder, exhilaration, love and fun to explore. A “once in a lifetime” journey accompanied by a tenacious twist of artistic urgency that held me captive, wouldn’t let go but never let me down!
More to Come...

Stay tuned for photos of what I did with the pictures I received from Jackie and how the rest of the “project” evolved into a full blown family history/art book.

Who knows, you may be inspired to do the same for your family and some of my experiences in the realm of genealogy (a very uncharted and never before attempted path) may be helpful to you or at least jog you into thinking about it LOL!